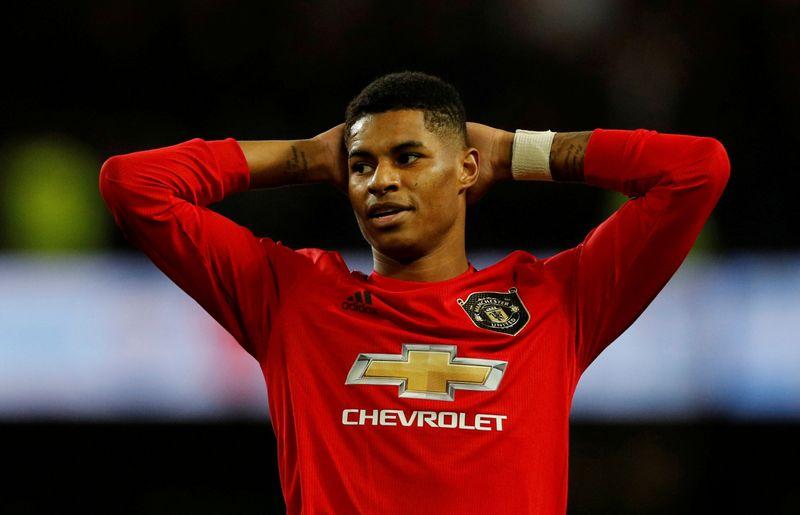 LONDON (Reuters) – Manchester United and England forward Marcus Rashford has stepped up his campaign for the government to fund free meals for struggling children through the summer school lockdown, support he himself had to rely on as a boy.

The 22-year-old soccer star has taken a prominent role during the pandemic to raise awareness and funds for those families who are “existing on a knife’s edge” and struggling to feed their children.

Partnering with charity FareShare UK, he has helped to raise around 20 million pounds ($25 million) to supply meals across the country, and is now urging the government to continue its food voucher scheme given to children who are eligible for free school meals.

“As a family, we relied on breakfast clubs, free school meals, and the kind actions of neighbours and coaches,” he wrote in a letter to the government posted on Twitter.

“Food banks and soup kitchens were not alien to us; I recall very clearly our visits to Northern Moor to collect our Christmas dinners every year.”

As a black man from a low income family in Manchester, Rashford wrote that he could have been just another statistic. Instead, due to the support of his mum and his community, he is known for the goals he scores and his England caps.

He is now worried about those children slipping through the net, who had previously been given a hot meal at school. Of the 1.3 million children who are registered for free school meals in England, he said a quarter had not received any support since schools closed in response to COVID-19.

“Do you know how much courage it takes for a grown man to say, ‘I can’t cope’ or ‘I can’t support my family’? Men, women, caregivers, are calling out for our help and we aren’t listening,” he said.

Paul Scully, a junior business minister, said the government was spending money on summer activities and local authority hardship funds to reach those families who needed support in the summer. “He is an inspirational figure,” he told BBC TV, of Rashford.