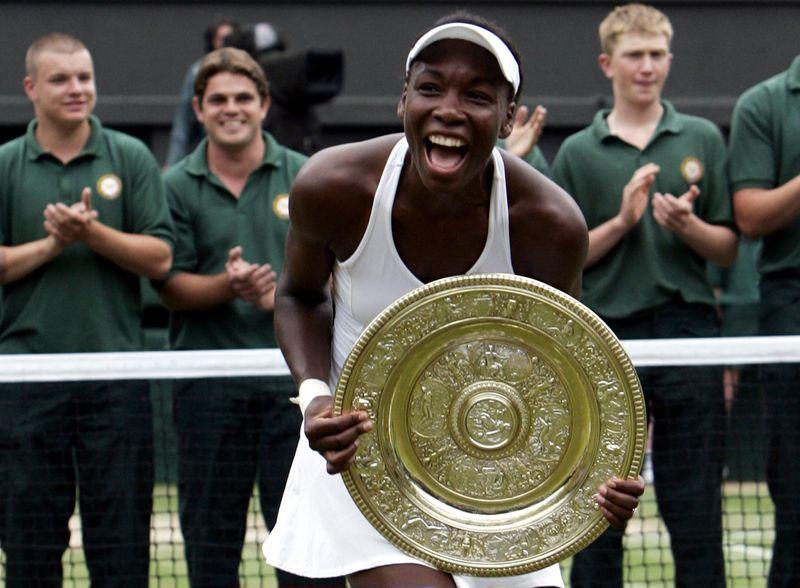 (Reuters) – Venus Williams might have been overshadowed by the exploits of her younger sister Serena as a player, but the towering American’s place in women’s tennis history will extend far beyond her seven Grand Slam singles titles.

FILE PHOTO: Venus Williams of the U.S. celebrates with the Rosewater Dish after winning the Wimbledon title, July 2, 2005. REUTERS/Kieran Doherty

The elder Williams sister blazed on to the tennis scene in the late 1990s and dominated with her power and athleticism in 2000 and 2001, winning two Wimbledon and U.S. Open titles plus Olympic gold medals in singles and doubles.

The No.1 ranking followed in February, 2002, and Venus then reached four successive Grand Slam singles finals from the 2002 French Open to the Australian Open in 2003 but on each occasion ended up losing to her sister Serena.

With her powerful all-court game and big serves tailor made for the All England Club grass courts, Venus won her fifth Wimbledon trophy and last Grand Slam singles title in 2008 when she bested Serena.

Her last appearance in a major final also came in south-west London in 2017 when she lost to Spaniard Garbine Muguruza.

Wimbledon was also where Williams, who was diagnosed with the autoimmune, fatigue-inducing illness Sjogren’s Syndrome in 2011, did much in the struggle for equality in her sport.

She was at the forefront of a campaign by the WTA Tour to force Grand Slam organisers to address the issue of equal pay.

“For us, it’s not about earning more money or becoming any more well off. It’s really about an equality issue, about being created as equals, as human beings, despite sex,” said Williams.

Her stand inspired others, including British Prime Minister Tony Blair, and helped force Wimbledon organisers to pay women and men equal prize money for the first time in 2007.

Williams has also been busy off the tennis court as Chief Executive of her interior design company V Starr Interiors and she owns a fashion line named EleVen.

Brought up in the notorious Los Angeles suburb of Compton, Williams began playing tennis on public courts at the age of four. Her family moved to Florida so she and Serena could train at the Rick Macci Tennis Academy.

Her protective father kept her out of junior competitions and allowed her to compete in just a handful of tournaments a year to ensure she did not fall victim to early burnout. But Williams was mature beyond her age and turned professional at 14.

“I’m very happy that they have their opinion … I also have my own opinion and I think it’s about time for me to go out and play professional,” she said, responding to doubts about whether she could handle the pressure.

Venus said in 2000 that she wanted to dominate tennis like Tiger Woods did in golf.

“I told my sister, Serena, ‘This Tiger Woods, he’s the man,” said Williams. “We really have to be like him – dominating’.’

“All the other golfers were in awe of him in the way they were saying, ‘We can’t win.’ We definitely have to take a chapter from his book.”

Though success on court has dried up in recent years, Venus has played on and she is keen to add to her Olympic medal tally of four gold and a silver at the Tokyo Games in 2021.